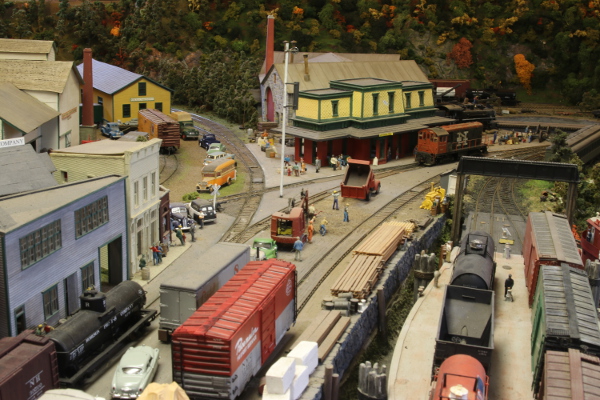 The Vermont Midland is a freelance representation of railroads in northwestern Vermont. Set in the late 1940s until 1957, it has grown to represent several interacting short line railroads. While the layout initially consumed about one-half of the basement, over the years it has expanded. It now consumes most of the 1000 square feet of space. The layout is HO scale. 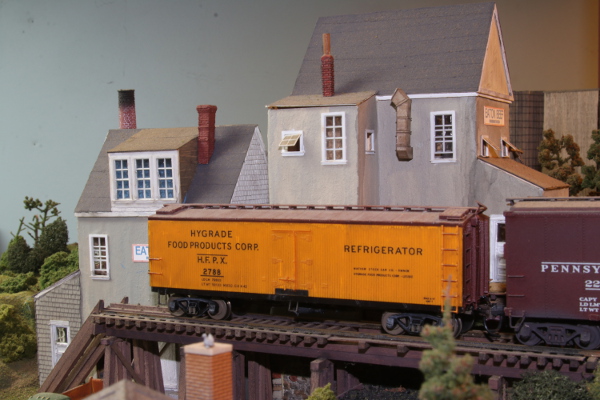 The main line winds from room to room and is reportedly nearly 1400 feet long, tying together twenty-one towns containing nearly sixty industries. A combination of kit, kit-bashed, and scratch-built structures provide a varied assortment of industries and towns for trains and crews to visit and work. Motive power in the late 1940s and early 1950s is a mix of steam and early diesel locomotives. The rolling stock fleet is extensive with mostly heavyweight passenger cars and well over one-thousand freight cars of varying types. While most train activity is local freight, several passenger trains are included on the schedule. Track is a mixture of hand-laid and commercial track in codes 83, 70, and 55. Scenery is as complete as possible while battling the activities of nature’s critters (mice).

This layout accommodates a large number of active trains since many of the trains do not interfere with each other. Power and control of trains is provided by an NCE DCC system. Operation management is by verbal orders and car routing is controlled by the use of car cards.

Accessibility: 2 steps up then 3 steps down