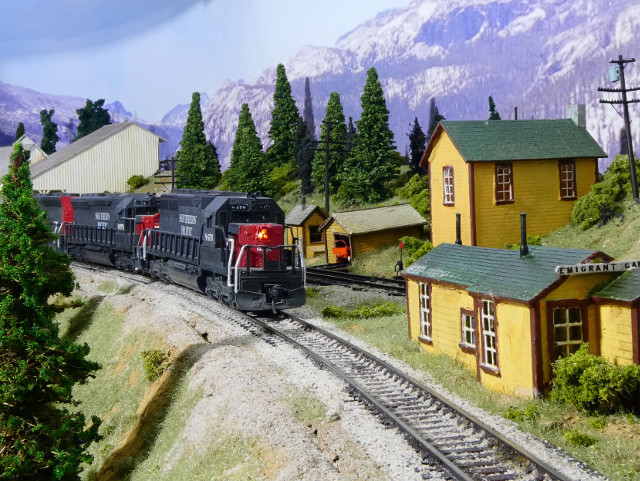 The layout represents the Southern Pacific route over Donner Pass from Roseville to Truckee, California in 1969. Ken grew up in Northern California and the Sierra Nevada mountains where a large part of his life was spent watching trains. 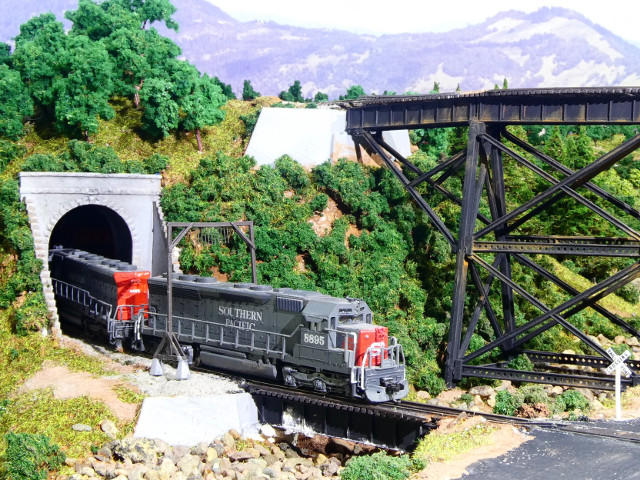 The layout is point-to-point in a split-level arrangement without a helix, a single track with lots of passing sidings. When complete the run length will be 250 feet. This works out to 7.5 scale miles. A minimum of 15 minutes will be required to transit the line at 25 mph which is a good estimate for the speeds used on the route by the prototype. At present the mainline is more than half complete. The track is code 55 with Atlas and Fast Tracks turnouts. Most turnouts are #10 or larger. Scenery is about 60% complete. The layout is N scale. 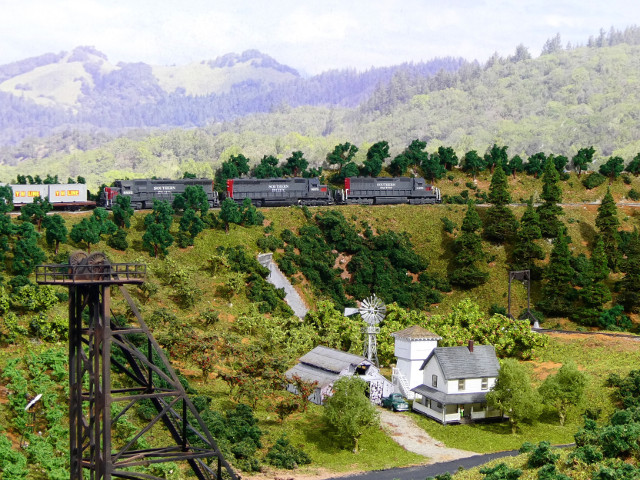 Motive power consists of SD-45s and SD-9s, though it is not unusual to see F-7s and FP-7s as well. GP-9s, SW1200s, H-16-44 and NW-2s occasionally run and will be used more widely at the lower altitudes on the layout. Typically three freight trains run on the layout. Rolling stock consists of freight cars that are appropriate for the time. Soon a passenger train will be running. There are four towns modeled and there are twelve industries that are rail served. Eventually there will be seven towns and nearly fifty industries. Ninety percent of the structures on the layout are designed on a computer and printed with a resin printer. Almost all structures represent actual buildings as they existed at their actual locations.

NCE DCC is used for train control and Loco-net is used for signaling, track feedback and turnouts. Most turnouts are controlled via servos. The layout is connected to JMRI, and occupancy on the five operational blocks are visible via JMRI on the computer. All mainline and most other turnouts are visible and can be controlled via JMRI. Track work at each locality is similar to, but scaled down from, the prototype. Layout is lit using LED spotlights to about one quarter daylight levels. The spotlights provide an approximation of the directional qualities of natural light.

Operations on the Southern Pacific consist of basic train orders and timetables. A computer generates waybills for each session. A full crew consists of five operators.